This story, which has many renditions, is adapted from Outlaws of the Marsh, an historical fiction attributed to the 14th century author Shi Nai'an. Also known by the titles Men of the Marshes and All Men Are Brothers, the novel is one of China's Four Great Classics of literature.

An outlaw with a good and deeply wounded heart. A young man of privilege whose desire turns lethal. The corrupt official who flouts justice to protect his son. Gather around for the tale of “Panther Head” Lin Chong— a respected gentleman turned outlaw hero. 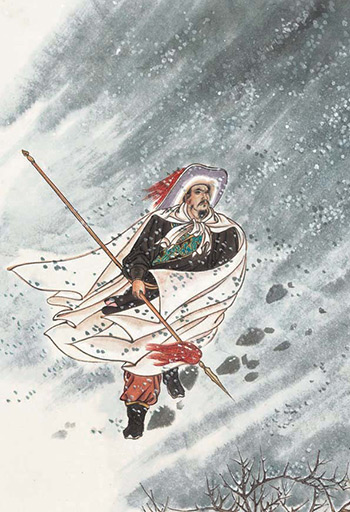 Lin Chong was a man who seemed to have it all. A master of martial arts, he was responsible for training the capital city's 800,000 imperial guards. Lin was a dashing figure, with a head like panther's (hence the nickname). He was respected for his strength and admired for his military prowess. And he was happily married to the beautiful daughter of one of his instructors.

Life was good. Until one day...

A nefarious official named Gao Qiu becomes our hero's arch nemesis. This despicable character is inspired by a corrupt grand marshal of the Song Dynasty by the same name (whether the accounts in Outlaws of the Marsh are more fact or fiction, no one knows for sure). The official’s son, Gao Yanei, has quite the reputation as a decidedly despicable womanizer.

One ill-fated day, the younger Gao spies Lin’s wife and is instantly infatuated. She becomes an object of obsession for him, his dark heart twisted to the point that he will do anything to possess her. Taking advantage of Lin Chong’s absence, he contrives one scheme after another to achieve his desire. Lady Lin is deeply shamed and chooses death over further dishonor.

When he hears the news, Lin Chong wants to seek justice for his wife but is stopped by the lecher’s father—the powerful Minister Gao. Lin is devastated, and yet his troubles have just begun.

Fearing that Lin Chong will seek revenge upon his son, Minister Gao frames Lin for attempted murder and he is exiled to a remote military outpost. This is not enough for the Gaos, though. They are out for blood and send their cronies to shadow Lin, waiting for the perfect moment to strike. 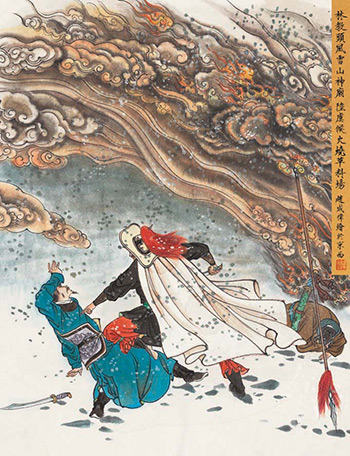 The winter night is bitterly cold. A blizzard has left snow mounded high and heavy on top of the little outpost. Suddenly, the roof collapses under the weight of snow and ice, raining splinters down on the building's single, miserable, occupant. Freezing and desperate, Lin is forced to seek shelter in an empty temple nearby. There, by stark moonlight, he watches in horror as Gao's minions put their torches to the building in hopes of roasting him alive.

His wife is gone, his good name is destroyed, and his life has been reduced to that of a pitiful exile. And now it seems the Gaos won’t stop until he’s dead. Lin, though, is not about to go down easily.

Lin bounds out of the temple with a fiery roar. At the sight of him, some of the scoundrels turn to flight; others surround him and lunge at him with swords. None of the mercenaries are a match for the incensed martial arts master. He dispatches them with a few thrusts of his spear and leaves their lifeless bodies in the blood-drenched snow.

But from behind him, Gao Yanei has already lifted his dagger and is quickly bringing it down toward Lin Chong. With a lightening swerve, Lin’s spear pierces Gao’s chest, his cold knife dangling at the end of a limp hand.

Lin knows he is now guilty of murder—self-defense aside—and that he will find no mercy from the courts. Standing in the desolate night, surrounded by gore and tormented by loss, he reaches into his shirt and removes a small, white handkerchief.

A gift from his wife, it's his last connection to her. His features shifting from loss to grim purpose, he pulls back his spear and uses the precious cloth to swab the blood of the nemesis who had debased her. Approaching a large stone tablet in front of the temple, he touches red cloth to white stone and writes four characters: “逼上梁山”—Forced onto Mt. Liang.

Lin flees to the wilderness of Mt. Liang, where he becomes one of the most-respected of a band of outlaws. Among the men whom fate brings to his side are the tiger-fighting Wu Song, the good-bad monk Lu Zhishen, and the “blue-faced beast” Yang Zhi.

In all, the novel tells of 108 such characters, hapless victims of circumstance forced to live as bandits and hope for eventual amnesty. The motley crew continues their ventures with “Panther Head” Lin Chong staunch by their side.

"Outlaw of Mt. Liang" is the title of Shen Yun’s 2015 dance mini drama, choreographed by Gu Yuan with music by D.F.

Ne Zha - The Most Unusual Boy in Chinese Mythology